Miamaska began from a series of novellas Jeinu wrote from 2005-2009, inspired from a one-shot comic written in 2001. Originally, the first novella followed Trosce as the protagonist before the writer realized the more interesting story happened with Amity. The second and third novellas were primarily from her and Rila’s perspectives, with the fourth being from Loric’s. Overall, they’re rather awkwardly written and will probably never be released.

There was a brief period in which it was intended to be an animated web series before the creator realized that took like, way, way too much time and organized effort. Miamaska comprises about 2/5th of the entire series’ storyline. 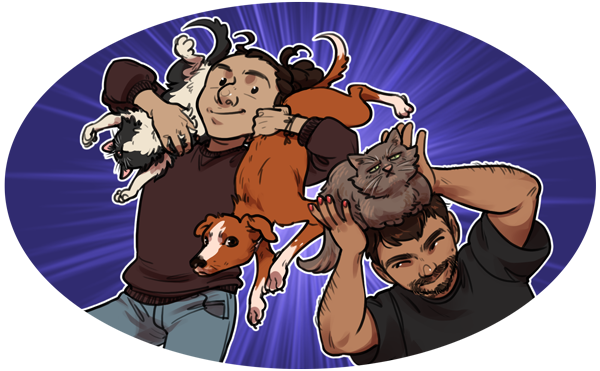 Jeinu is a self-taught artist living in Utah aged around 24 years. He considers himself more or less a hobbyist despite drawing professionally for five years.

After binge reading “His Dark Materials” trilogy at age 10, he was inspired to become a writer in the despair that followed. He resolved to go about making comic one-shots and filling binders full of shoddily handwritten novels, some of which became the basis for his comics. For a brief time in his teens, he got into webcomics and meandered around poking into the flash animation scene, where he was introduced to Tarienn. They have since collaborated on animations, games, stories, and a variety of commissioned work. Eventually he looped around to making comics again.

Nowadays, he has married Tarienn and spends most of his free time consuming an inordinate amount of artichoke hearts. He has a finicky rescue dog named Coriander and a very cool cat named Cosmo, who are best friends. He also has far too many plans for the future, but that’s neither here nor there.

You can contact him directly at jeinu@marble.team! Just know he doesn’t take commissions and won’t draw your webcomic idea! Nope, not even for exposure!

Tarienn is a wizard or something? Not sure. He’s in charge of managing the website and a cat named Ofee. His day job involves telling people how to fix their computers and sometimes people even listen to him! He founded a small game development group called Mar-ble Team in 2012.

He married Jeinu in early 2015. Together they make pancakes Saturday mornings and annoy friends by indiscriminately humming lines of the Pkunk theme from Star Control 2. It’s a serious problem and it’s tearing everyone apart.

If you see a problem with the website or don’t receive donation rewards, you can contact him directly at josh@marble.team! He might draw your webcomic idea, but you’ll probably seriously regret it.